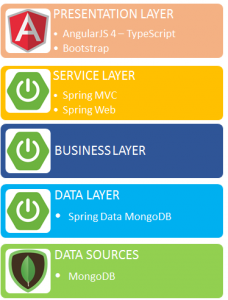 In this new serie of articles, we will see how to create a simple web application using Spring Boot as an acceleration framework for back-end development and REST services implementation, MongoDB as a NoSQL database and Angular 4, with TypeScript support, such as javascript framework for the front-end.

Trying to schematize, we could map this list of technologies to the various levels of the classic diagram of a multi-tier architecture, getting the result shown in the image here to the right.

Finally, we will also deploy it to Azure, the Microsoft’s cloud platform, using an Azure Webapp as a container for our Spring Boot application and a series of Virtual Machines on which we will install our MongoDB Replica Set.
The following diagram describes, at a high level, what will be the physical architecture of our solution deployed on Azure.

Well, we can start!

What is Spring Boot?

Spring Boot is a framework for the development of Java-based web applications that offers, thanks to its conventions and so-called “starters”, an additional level of abstraction, especially in terms of project setup and configuration and of dependencies management, compared to the use of Spring Framework. It thus allows us to further reduce the time needed to implement and distribute our solutions.

As we go ahead in the article we will see all the benefits that Spring Boot introduces in developing a web application, while for now we limit ourselves to this first list of its main features.

Spring Boot has a dedicated development environment called “Spring Tool Suite” which is actually nothing more than an appropriately customized version of Eclipse.

So first, let’s proceed with the installation of this environment. You can download “Spring Tool Suite” from the website https://spring.io/tools and, once downloaded, just follow the installation procedure 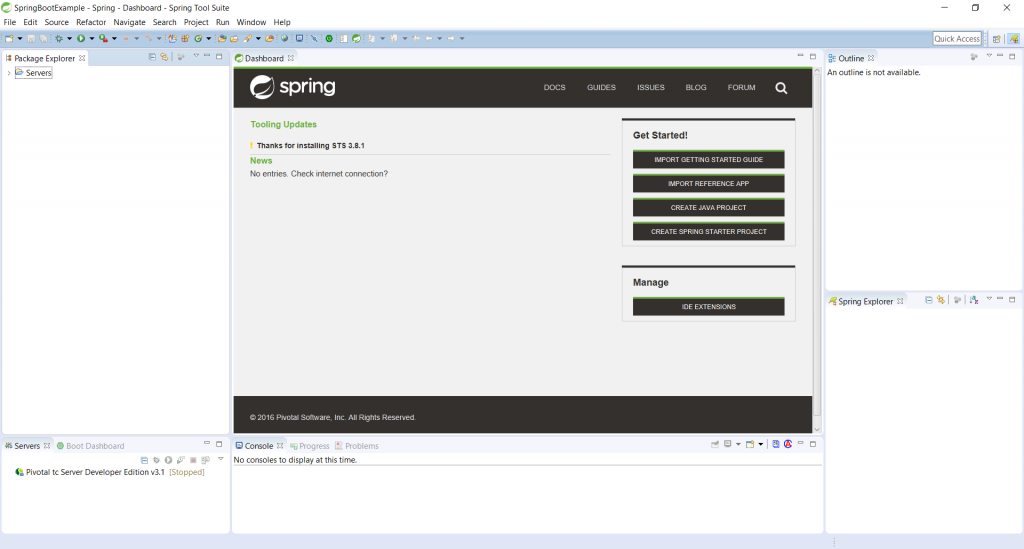 Once we’ve installed the “Spring Tool Suite” environment, we can proceed with creating our first Spring Boot project.
To do this we select from the “File” menu the item “New” -> “Spring Starter Project”, as shown in the following figure 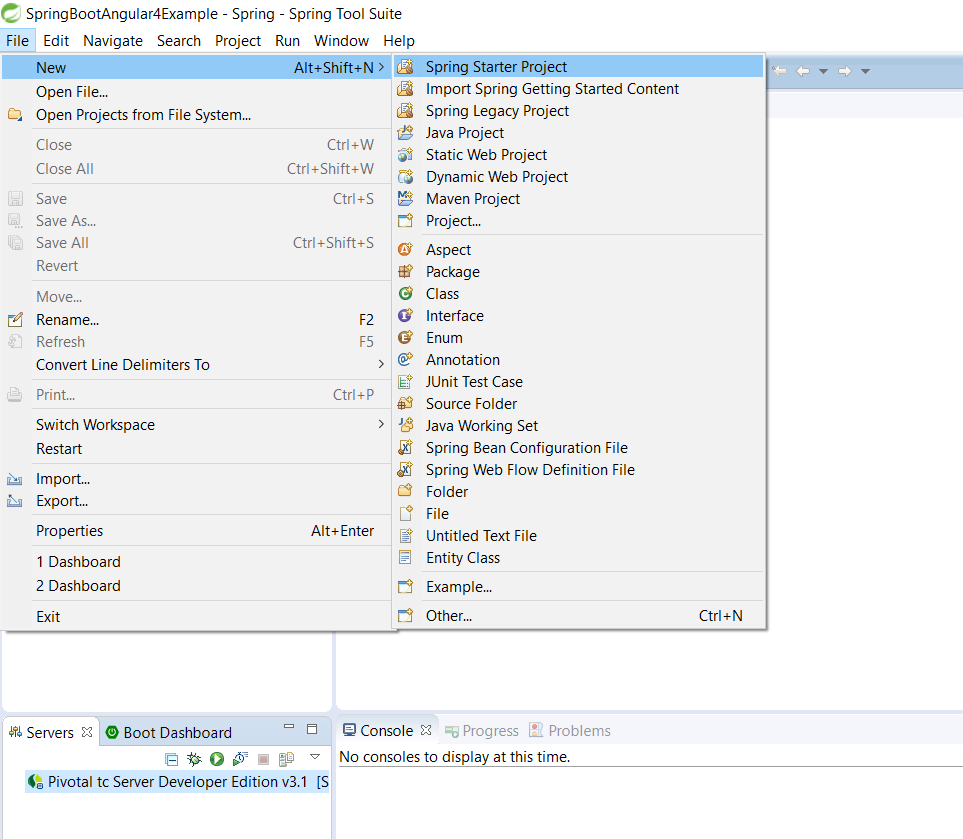 and we insert the name of the project, such as “SpringBootAngular4Example”, and its characteristics.

In particular, we point out that: 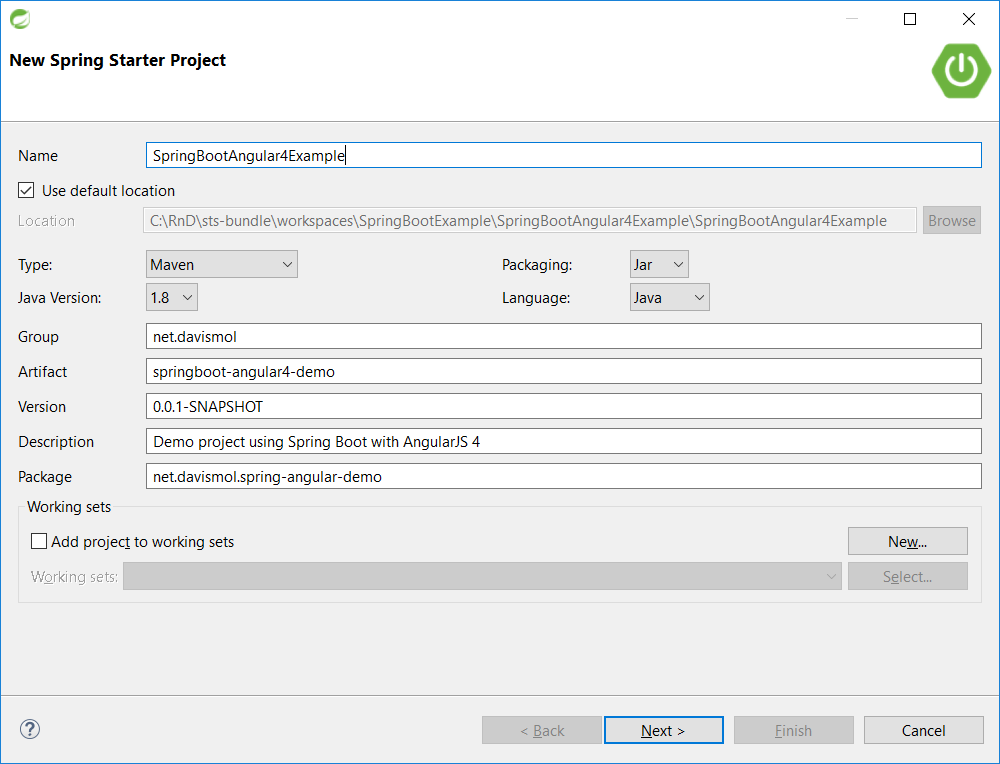 By clicking on “Next”, we go to the next screen of the project creation wizard, which asks us which “starters” modules we want to initially add as dependencies.

For our example we select:

The image below shows the selected dependencies: 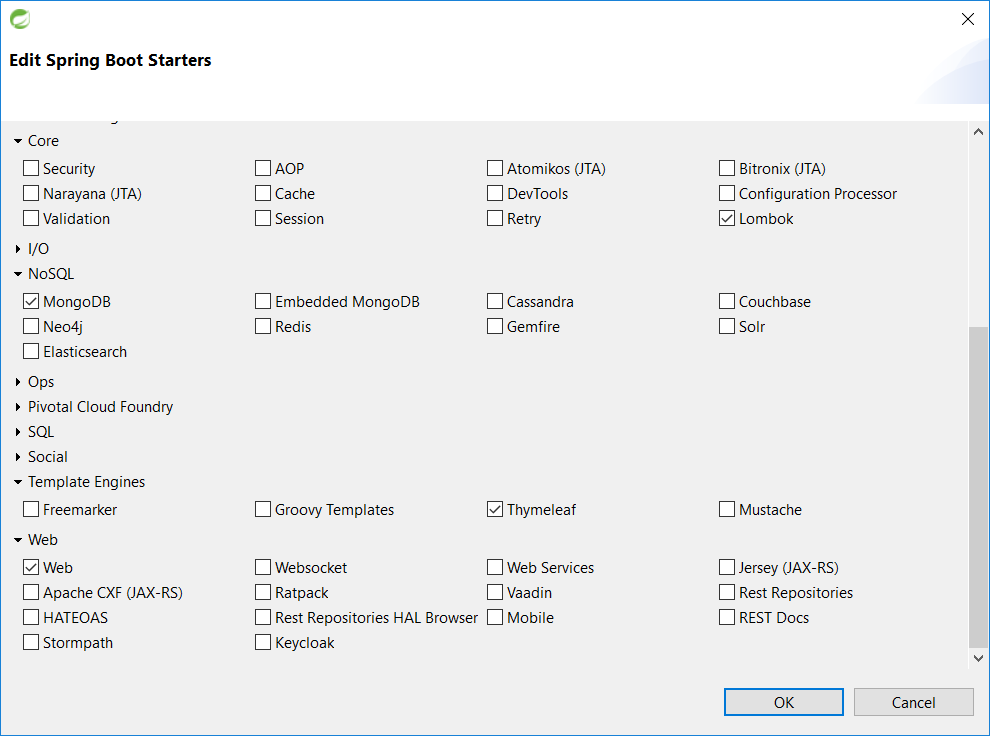 By clicking on “Finish” we complete the creation of the project that will now appear in the “Package Explorer” section of our development environment with the typical structure of a Maven project as we can see from the following figure: 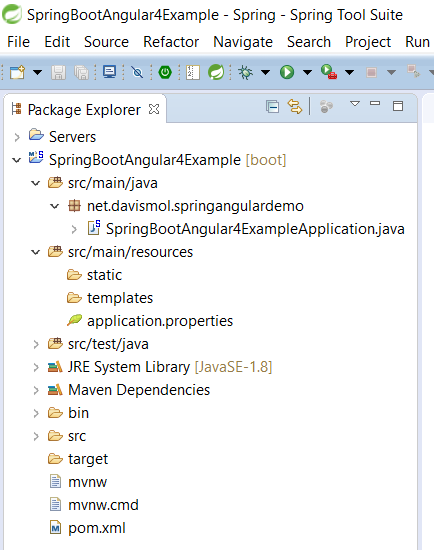 As we can see, in the new project have been created:

If we open the FirstSpringBootApplication.java class we see that its content is as follows:

@SpringBootApplication is a Spring Boot annotation that encloses @Configuration, @EnableAutoConfiguration and @ComponentScan annotations to configure the application with the default parameters.

The main instead contains a call to the “run” static method of the SpringApplication class that actually executes the application.

If we open the Maven POM file, “pom.xml”, we see that the following dependencies are defined within it, relating to the “starters” modules we had selected during the creation of the project: 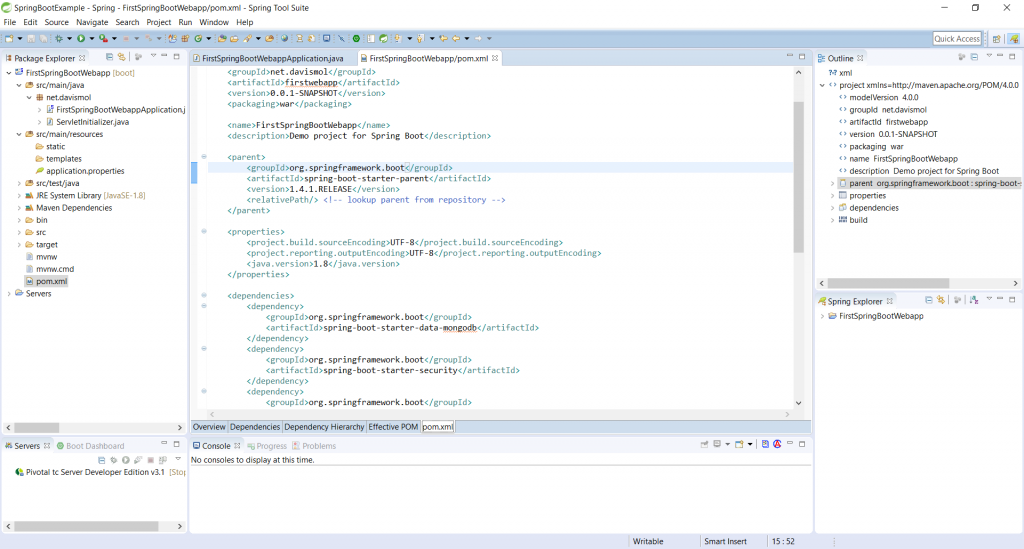 Each Spring Boot “starters” contains a file called “spring.provides” that contains the list of libraries the starter itself includes.

For example, to see what packages are contained in the “spring-boot-starter-web” starter, we look for its jar through the Package Explorer in the list of “Maven Dependencies” and, clicking on it and entering the “META-INF” folder, we find the “spring-provides” file. By opening it with a double click we can see its contents: 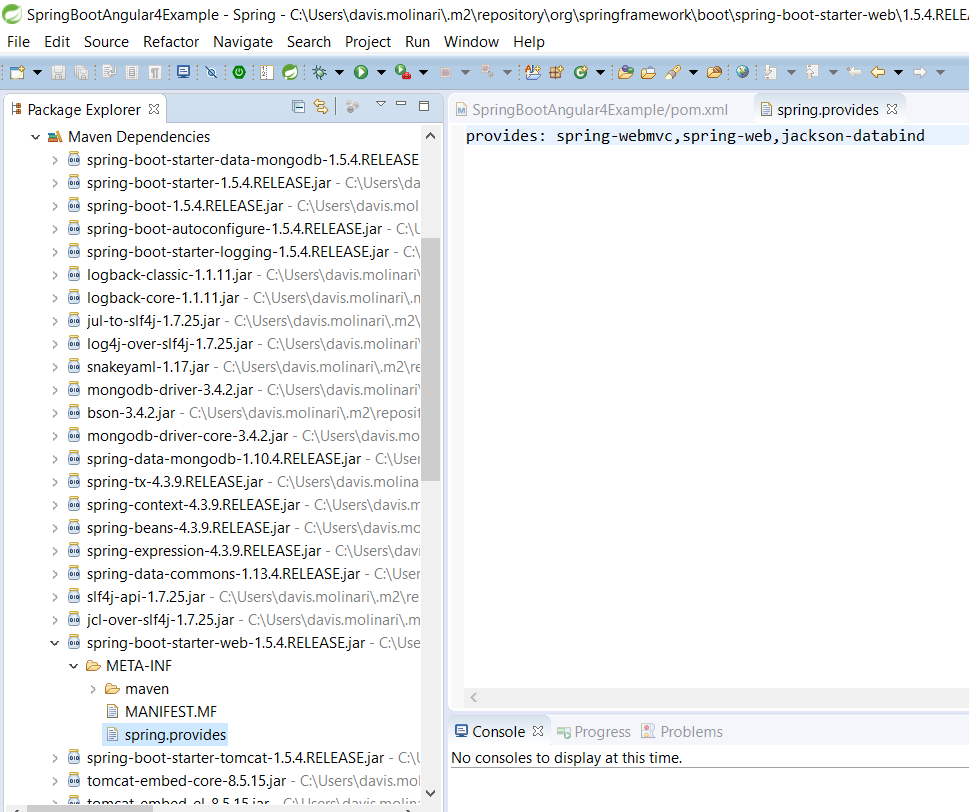 Go to the next part of the article: Part 2

5 thoughts on “Create a modern web application with Spring Boot, MongoDB, Angular 4 and TypeScript and deploy it in cloud as Microsoft Azure Webapp – Part 1”