One of the most anticipated ICOs (Initial Coin Offering) for the month of March 2018 is definitely Friendz. Through analyzing it, reading their whitepaper and looking on the web for the opinions and evaluations it got, I immediately found it being an interesting project.

After having participated a couple of night ago to an event at the Talent Garden Calabiana in Milan where Alessandro Cadoni and Cecilia Nostro, 2 of the 3 founders, presented their project, explained how and why they arrived at an ICO and they kindly answered the avalanche of questions that have been made, the feeling of a concrete reality with clear ideas has not only been confirmed, but also strengthened by the passion they demonstrated. 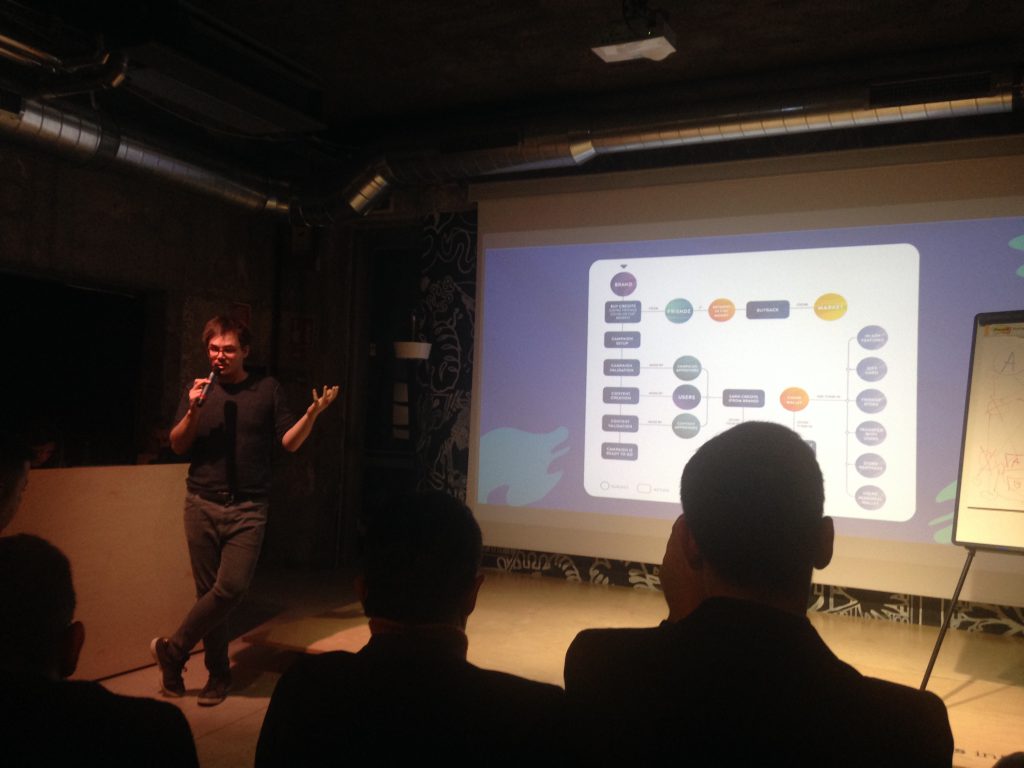 But let’s take a step back.

What is Friendz?
Friendz is a digital marketing app that provides a unique meeting point between users and customers brands and their products. Simplifying to the maximum, the former has the opportunity to make money, making creative shots from their smartphones while the latter can in this way get high quality advertising campaigns, finely targeted and adhering to their requirements on the channel with the highest impact at the time: the main social networks like Facebook and Instagram. All this is stimulated by an endearing internal gamification system which, as underlined by Alessandro in response to one of the various questions at the end of the event, significantly increases the level of users engagement, satisfied not only by the economic aspect of the reward for a quality creative work, but also from the emotional one.

What are Friendz’s numbers?
Friendz is something much more concrete than an idea. It is in fact a company of 35 employees, headquartered in Chiasso, Switzerland, and with two other offices one in Milan, Italy, and one in Madrid, Spain. It is, above all, a company that has a strong working product and a well-established users base; their app, Friendz, has been in fact downloaded by more than 200 thousand users, with over 40 thousand of them active monthly. More than 200 companies have implemented marketing campaigns through Friendz, exploiting the credibility effect that a picture posted on a person’s social profile has on friends and acquaintances. Among these, top international brands such as Ferrero, who used Friendz for the campaign to present the new jar of Nutella, Decathlon, Huawei, Philips are just a small part of those presented by Cecilia in the overview of the successful projects they worked on so far. 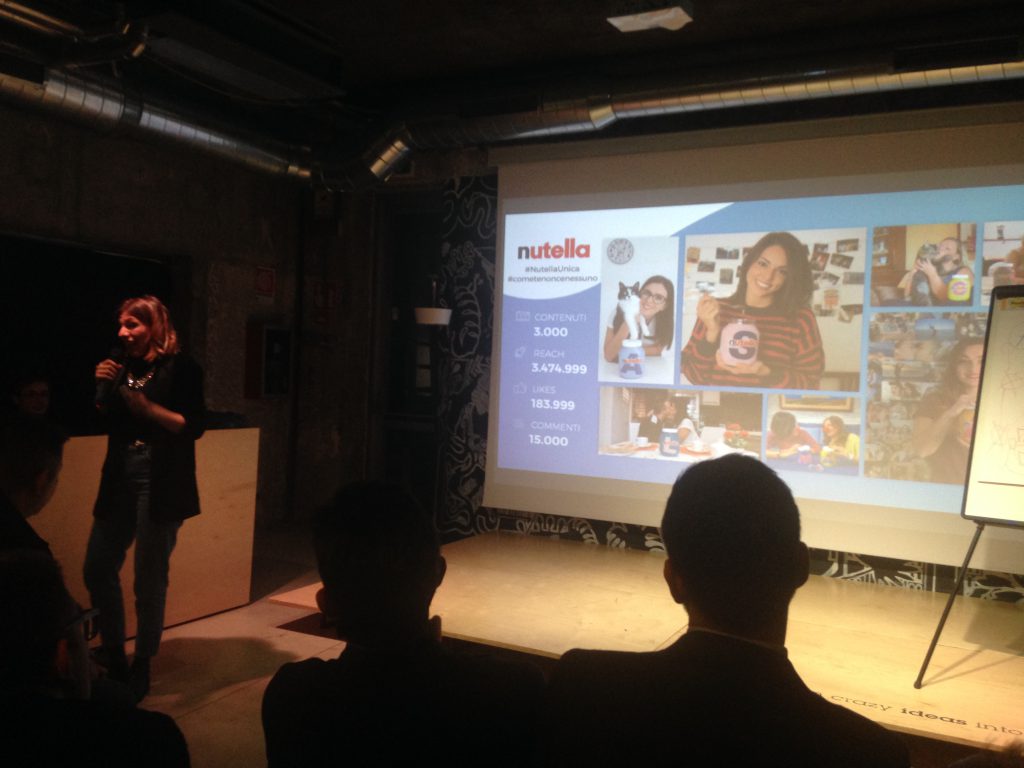 Why the blockchain and an ICO?
Friendz, internally, already uses a sort of “currency” to reward users for their creative shots and for in-app purchases. With the introduction of the blockchain and an ERC20 utility token based on the Ethereum blockchain, the goal is to create an ecosystem in which all transactions of value exchange between the various actors involved are made through Friendz token (FDZ).

The companies will then pay for their campaigns in FDZ (receiving a discount compared to the purchase made with fiat currency), users will receive FDZ for their “work” as well as the approvers and validators. The goal of Friendz is then to make agreements with e-commerce stores to accept the FDZ token, thus allowing users to have a concrete outlet for the spendability of the rewards obtained in the app.

In order to keep the demand for FDZ tokens high, if customers wish to pay for the services of the company still in traditional currency, part of the amount between 15% and 30% would be used by Friendz to buyback FDZ token. The ecosystem focused on FDZ that Friendz has in mind, and that Alessandro clearly explained to the audience, is summarized in the following diagram extracted from their whitepaper: 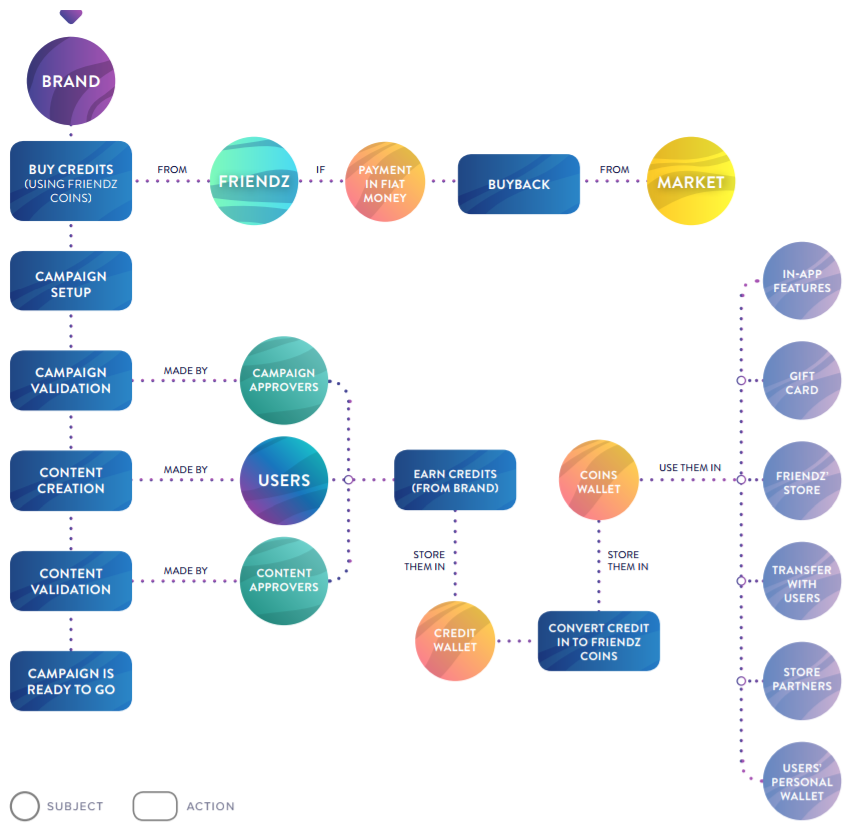 Regarding the ICO topic instead, they explain, it is certainly a quick and easy way to obtain funding compared to the traditional venture capitalism channel, where “to give you 1 million they ask you half of the company and order you what to do from the beginning to the end”. After all, that of crowfunding is one of the concrete uses of the blockchain itself, often accused of being a very powerful technology but, in some ways, still too abstract and difficult to apply.

Arriving at an ICO, they state, “has been demanding and has required many efforts”; the goal now is to raise the capital needed for the next steps of the roadmap, starting from business development and marketing activities aimed at growth on global markets, which most of the funds will be allocated to.

How does Friendz’s ICO work?
Friendz’s ICO will start on 1 March 2018 and will last 3 weeks. The hard cap is set at 750,000,000 Friendz tokens, identified by the FDZ symbol, equal to 50% of the total supply available of 1.5 billion tokens. FDZ are ERC20 compatible tokens, since they are based on Ethereum’s Blockchain.
In detail, the allocation of FDZ tokens will be as follows: 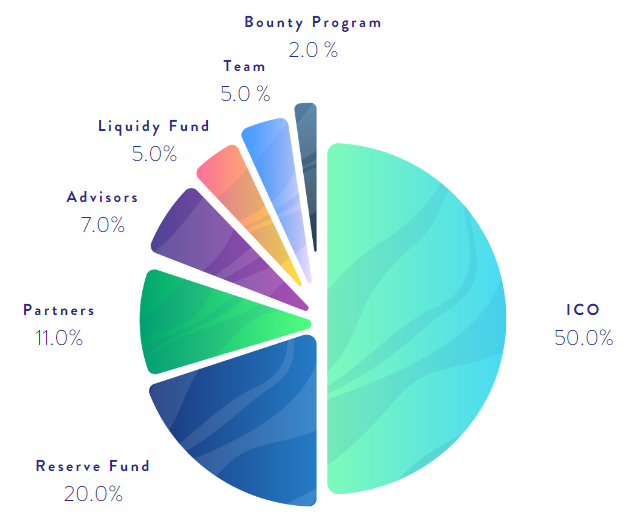 The minimum contribution that can be paid will be 0.1ETH and there will be 4 different phases of the ICO in which, progressively, a discount will be applied on the FDZ token price, set at a value of 0.067 Dollars. The phases will be:

Given the huge demand, the Friendz team has put in place a ranking system, based on which users will gain priority over the purchase. Users can get points by completing a series of actions such as subscribing to the Telegram channels and the newsletter, providing the Twitter username and sharing the ICO with friends through the referral system . 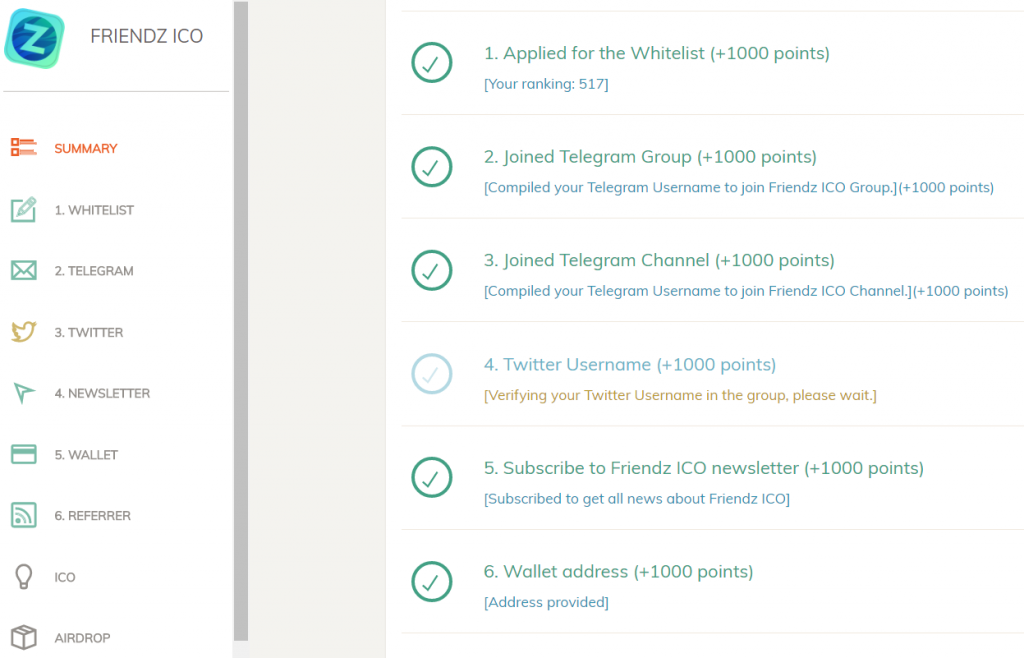 The meeting with the Friendz Team
As mentioned, the reading of a whitepaper and the search for a bit of review around the web are useful, but the direct contact that offers the feeling of discussing the project face to face with the owner is a priceless added value. And what better occasion than an event about blockchain and cryptocurrencies in which the Friendz team is present to talk about its adventure. For this reason I decided to participate to “ All what you need to know about the blockchain and the ICO” organized at the Talent Garden in Milan, Italy.

At first, Cecilia presented a bit about their vision and the business in which they are located and, as already mentioned, she illustrated some of the projects and brands with which they collaborated. Then, Alessandro analyzed what are the pros and cons of an ICO, from both the point of view of a company that wants to use it as a tool for raising capital and that of a potential investor. He also explained what are the main evaluation criteria for an ICO, indicating how Friendz aims to satisfy them.

These criteria are the same that are used on the main sites of analysis of ICO, that is: the vision and the whitepaper, the team and the advisors but, above all, the fact that the company that is going to go to ICO already has or not something tangible from which to start and around which to develop. Criteria for which also Icobench, one of the main ICO assessment portals, assigned to Friendz the evaluation of 4.8 out of 5, one of the better ever assigned. 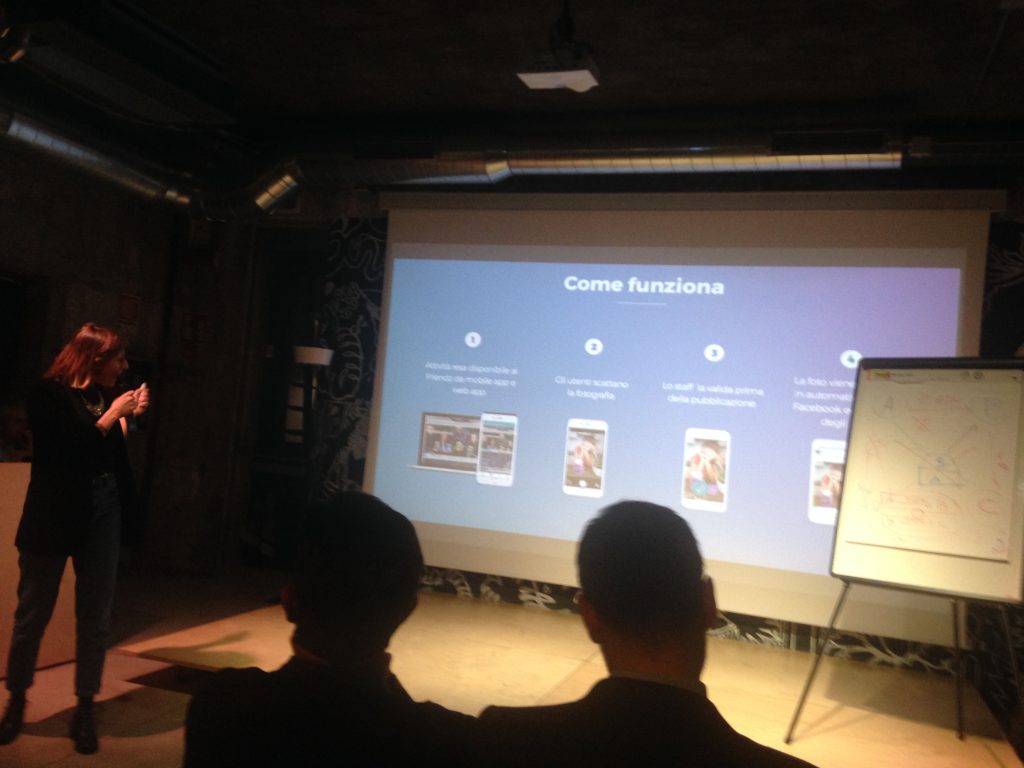 Participation in the event was significant, a sign of the increase in interest that gravitates around the subject, and the numerous people in the room asked a lot of questions, even very direct, to the Friendz team members.

The questions were things like “Why in Switzerland?” and “How much did you spend on the legal part of consulting and support in the drafting of the whitepaper?”, passing through “How did you choose the advisors?”. Honestly, the guys have shown clear ideas and have been able to respond without hesitating to all requests. The choice of Switzerland, they said, was dictated by a couple of factors: the opening towards this type of innovative solutions both from a technological and an economic point of view and the fact that there is starting to be a little regulation that, if well studied, it’s a good thing. The legal advice, entrusted to KPMG, after having made contact also with other studies, costed around 100 thousand Euros. The advisors have been in part suggested and for others they have looked for but, as pointed out by Alessandro, “only after having everything ready” and being able to put in front of them a working product and an ICO plan studied in every detail.

The guys at Friendz seemed determined and justifiably proud of the product that they have in their hands and do not seem to be scared even by the idea that Facebook itself, constantly looking for ways to monetize the app of the “family” like Whatsapp and Instagram can decide a day to steal his trade and remove them from the role, in a certain sense, of intermediaries. “They might rather try to buy us” they say half seriously.

In conclusion, by premising that an ICO and, in general, the whole cryptocurrency token ecosystem is still in its initial phase and represent in any case an high risk investment, with Friendz we are facing a concrete project, already started and in which the introduction of a token utility can find its meaning.
Surely it has nothing to envy to many projects that go into ICO every day, indeed, perhaps it starts from one step ahead of many of them. The fact that everywhere people are talking about it in positive terms can’t be just a coincidence.

To participate to the Friendz “ICO” which, as mentioned, will start on March 1, 2018, you can go here.