This is the fourth in a series of articles. Here you can find the previous part: How to create a web application from scratch with Java, Eclipse, Tomcat, Hibernate and PostgreSQL – Part #3

What could have gone wrong so far?
We continue the development of our sample web application focusing for a moment on what problems we might encounter with the capabilities that we have implemented and the errors that may occur in the code and configurations developed so far.
We see, for example, the effects of a wrong configuration of drivers for the relational databases (PostgreSQL in our case) in the Hibernate configuration files, rather than attempting to make a getParameter for a parameter that does not really exist in the object HttpServletRequest. We’ll see also an error due to the violation of a constraint defined on the table during an insert of a new record.

(It is also a mistake really already seen, the result of a copy/paste from a previous driver configuration for MySQL in which, switching to PostgreSQL, it has remained the “.com” extension instead of “org”) 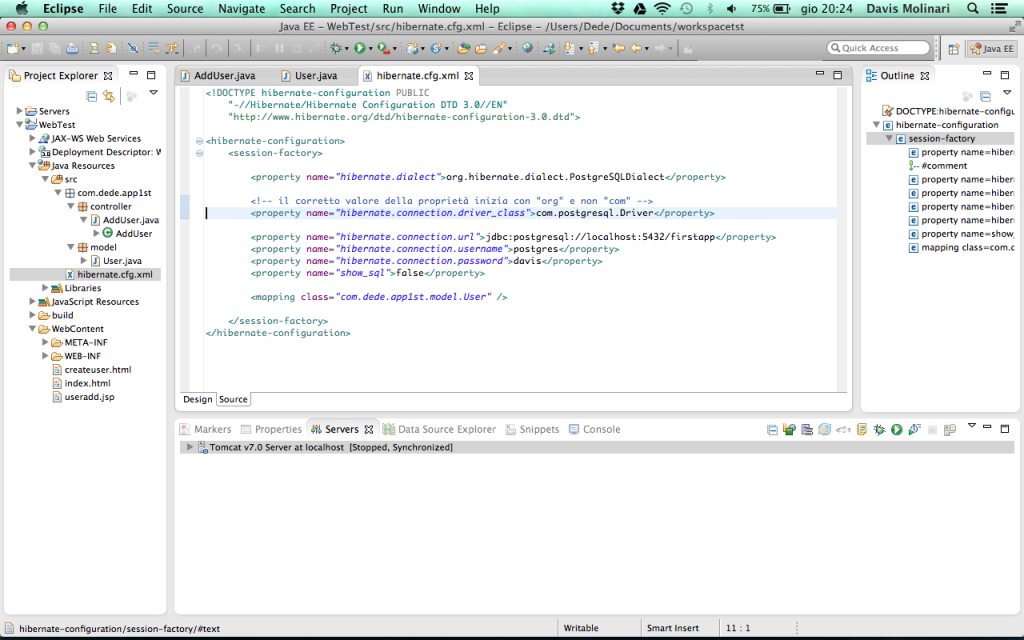 Running our application with this configuration of course we get an error that tells us that it’s not able to find the driver for the database that we have indicated:

The following image illustrates the result that Tomcat shows us: 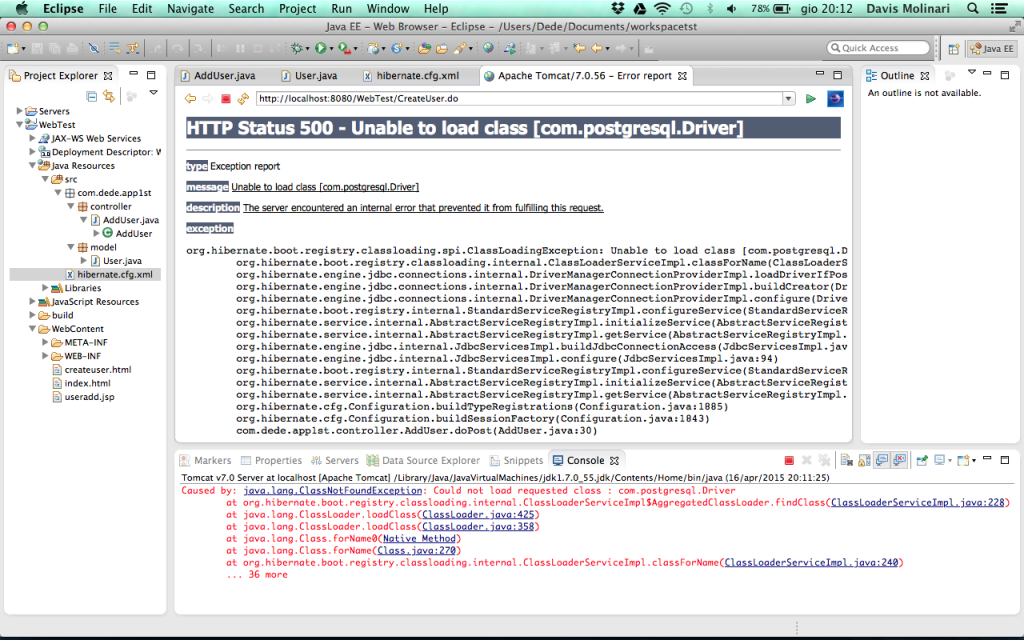 Another possible error is related to the fact that the credentials for access to the database included in the Hibernate configuration file are incorrect. If we try for example to change the value of the property “hibernate.connection.password” by assigning the value “davis” instead of “dede”, which is the password that we defined during the database creation, we get the following exception: 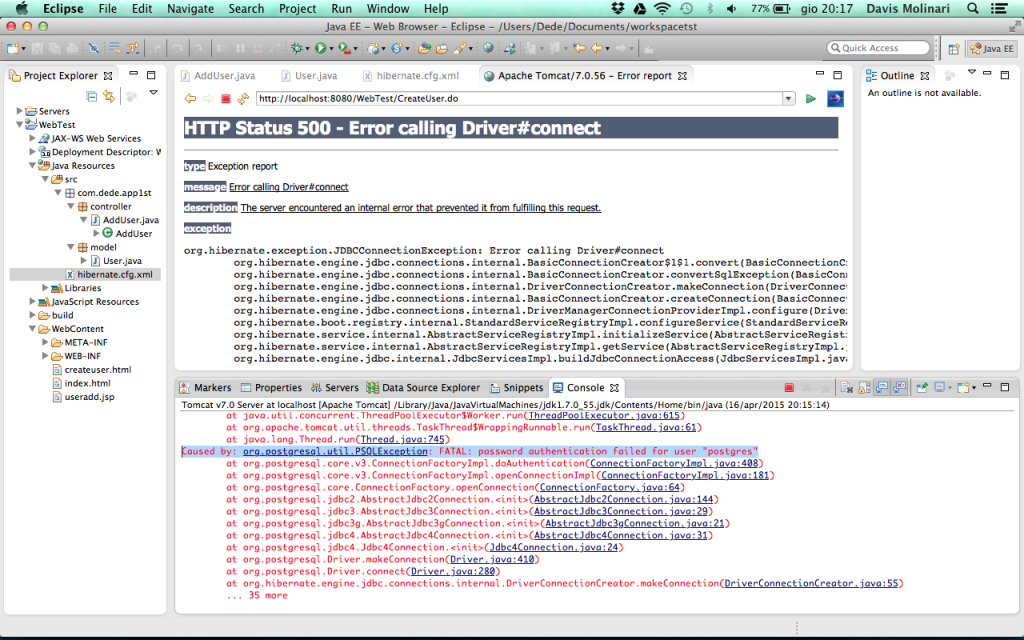 As we can see then, if we ask to the getParameter method to retrieve from the request the value of a parameter that does not exist, it returns a null vallue, without triggering any kind of exception or generate any error.
Let’s see an example:
Let’s go back to the first version of our application, the one where we had not yet introduced the storage into the database of the information related to the new user created. This version was limited to display on-screen user information, sent through the input form, by using the jsp page “useradd”. To do this, we go to the doPost method of our servlet and comment the part relating to the creation of the new User object and its insertion in the database through the Hibernate classes. 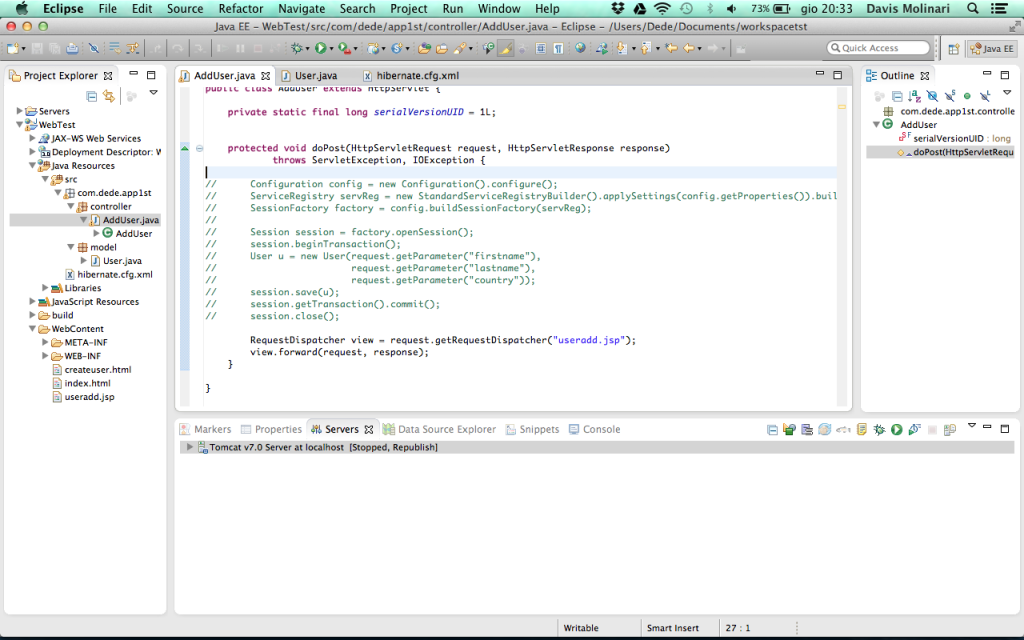 Now, let’s try to modify the “useradd.jsp” file by changing the name of the parameter we want to retrieve the value using the getParameter method from “firstname” to “first”. This obviously does not exist because in the form through which we submit the values the name remains “firstname”. 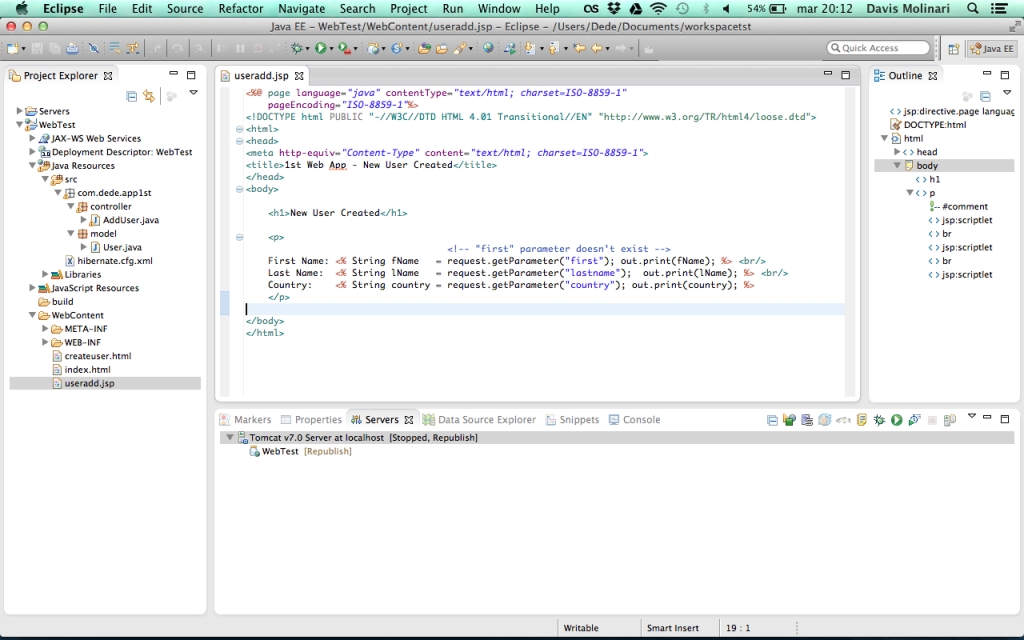 Now we start again our application, enter the data in the input form and submit it. What we expect, as we had already seen, it is that the JSP page shows us the data we entered. 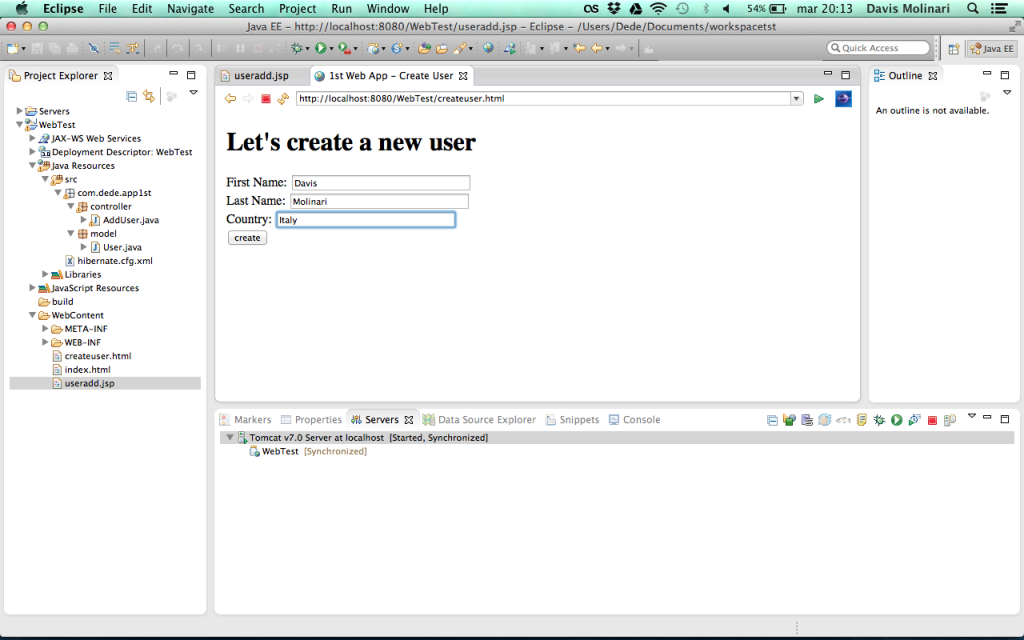 As we can see in the follwing picture, in correspondence of the “First Name” field we can see a null value instead of the value that we placed on the input form. This is because the getParameter method, finding no parameter called “first”, it returns in fact null. 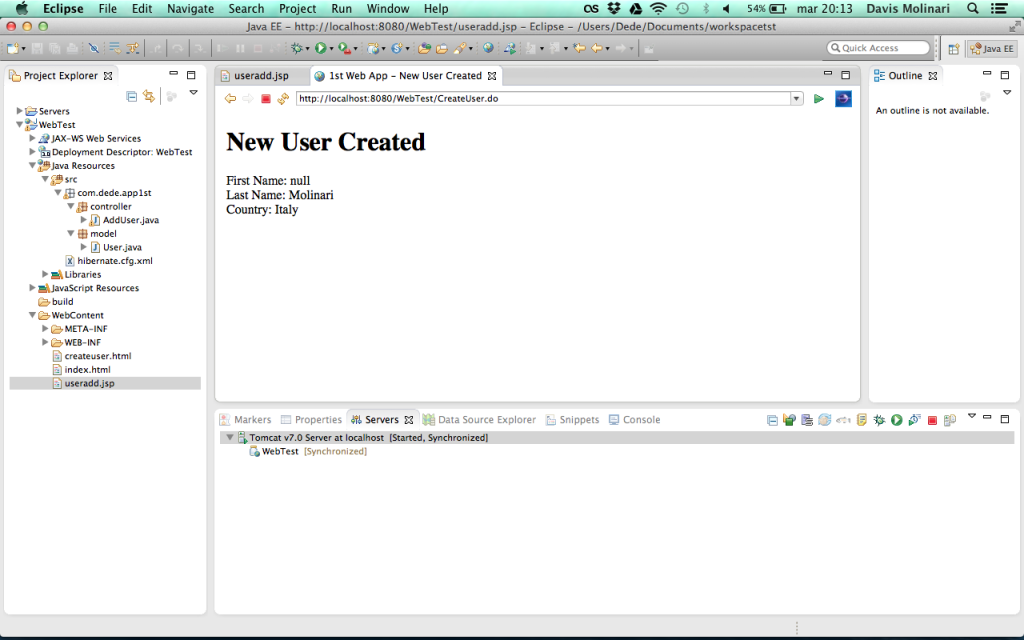 Now, let’s see a second example, in which we restore our application to the current version that handles requests by entering new users into the database and modify again the name of a parameter that we ask to HttpServletRequest using the getParameter method, passing it a name that does not exist. In this case we replace the name of the “country” parameter with “coun” inside the doPost method of our servlet, at the point in which we use the information sent with the request to instantiate the new object of the User class.
We instead leave unchanged the getParameter calls inside the JSP page “useradd”, which then successfully retrieve the values of all three parameters. 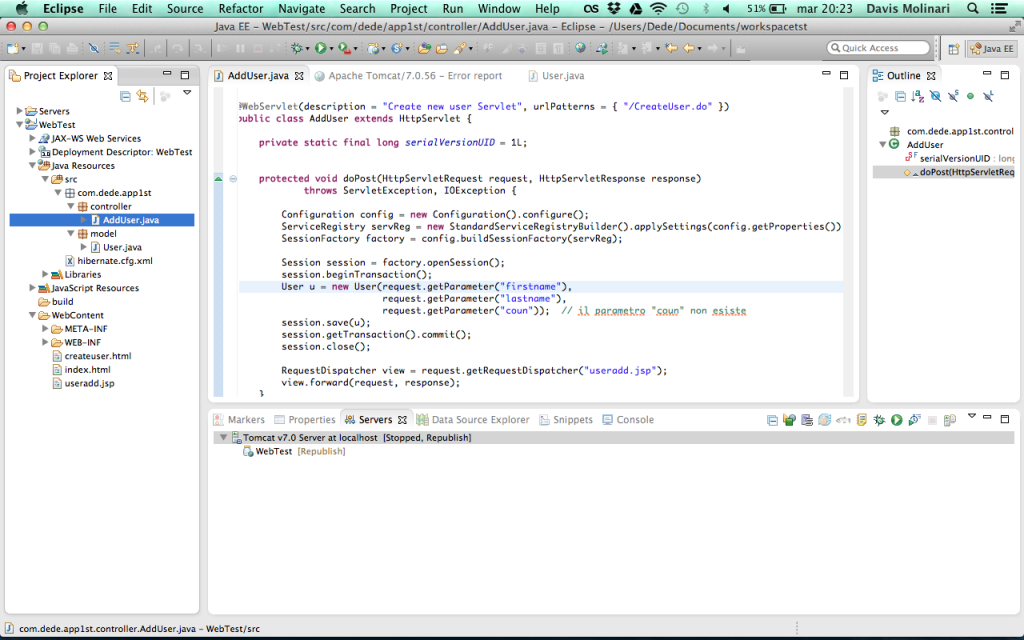 After making these changes we run again our application, we compile as usual the input form with the user data to create and we send the request. 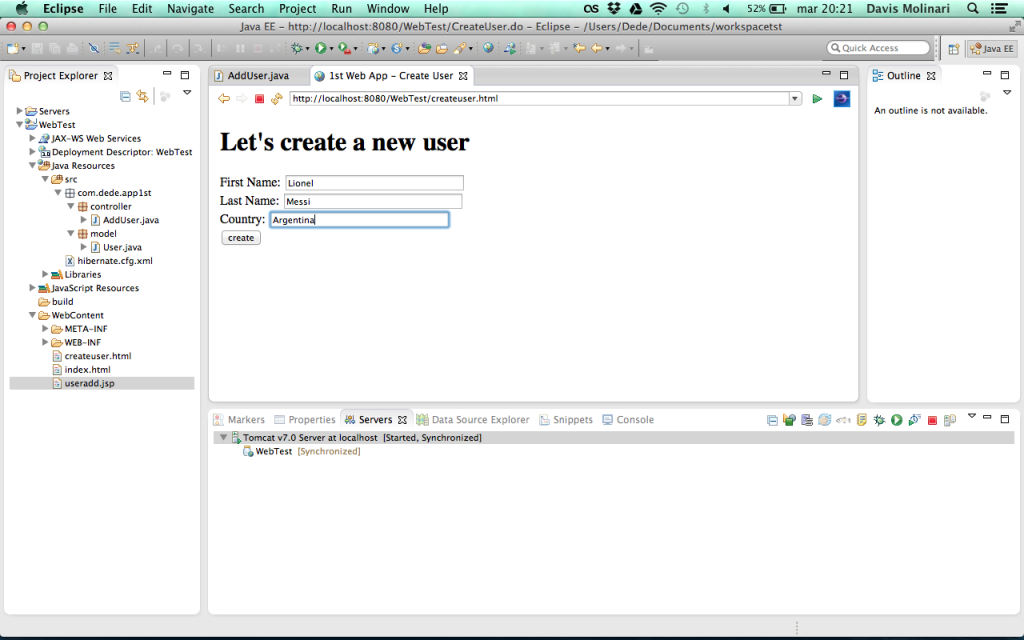 The result we get is that shown in the figure below, in which: 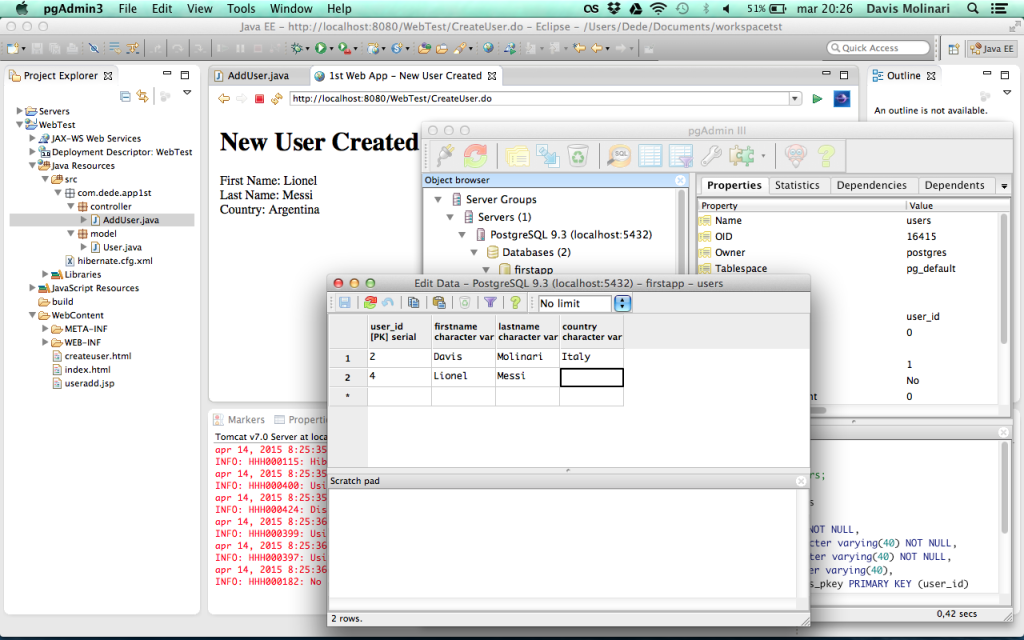 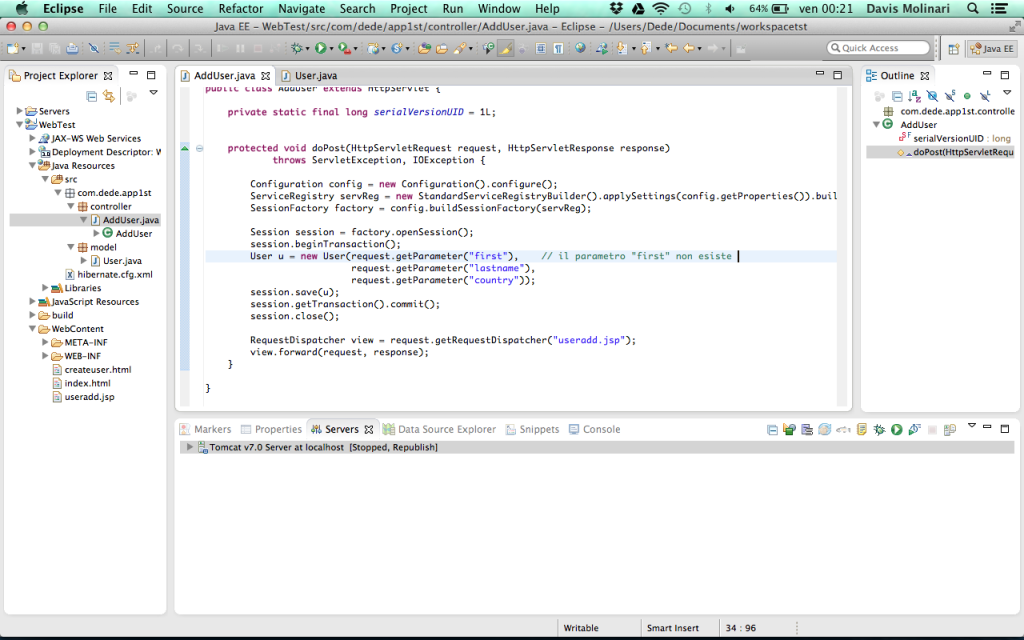 Again, we fill out the form with the information of a new user we want to enter … 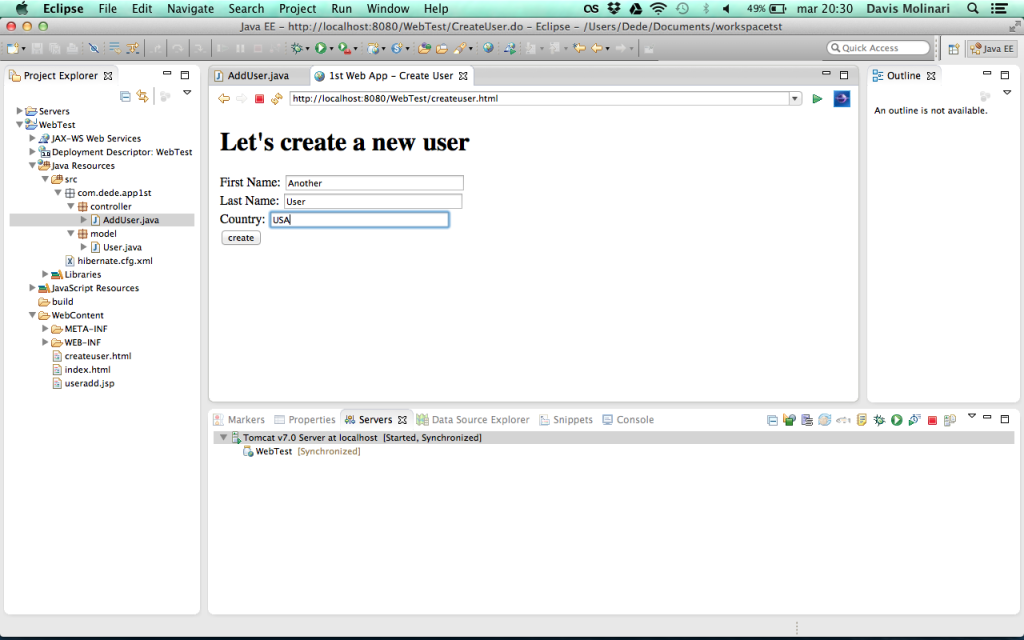 What we get in this case is an error of violation of a database constraint, as we are trying to insert a row, and then an object, that has a null value in one of the fields (firstname) that we had defined as not nullable when created the database table.
As we can see from the image below, Hibernate in this case triggers a PropertyValueException and gives us details on the error type and an indication about which field of which class has generated the problem.
In fact, we get for our example

that indicates us that the instance variable “firstname” of the “User” class is null and we’re trying to put it in a column of a database table that doesn’t allow null values. 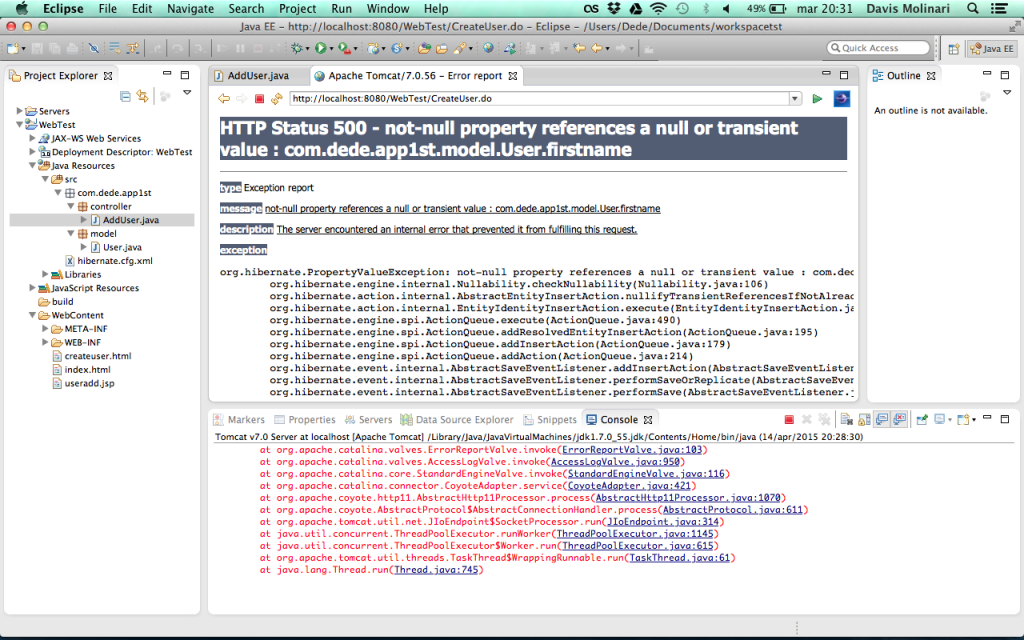 You can find the next part of this tutorial here: How to create a web application from scratch with Java, Eclipse, Tomcat, Hibernate and PostgreSQL – Part #5

6 thoughts on “How to create a web application from scratch with Java, Eclipse, Tomcat, Hibernate and PostgreSQL – Part #4”