In this post we still talk about Microsoft Azure Logic Apps , and in particular of how to implement a retry policy, on a step went into error, through the use of the do-until construct.
We take as an example the Logic App we had created in the previous post, where we analyzed the bug on the SFTP connector and pointed out his resolution by Microsoft team. 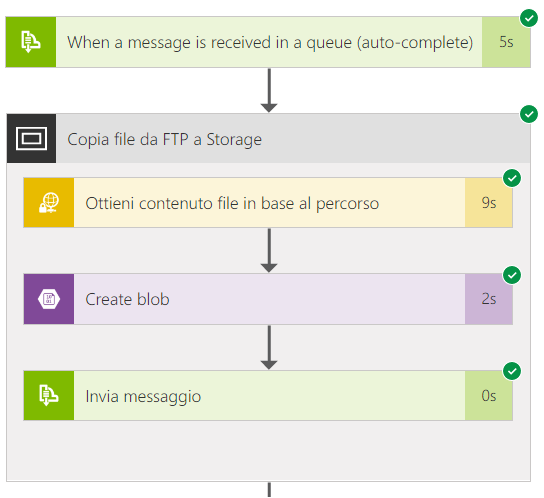 In this logic app there is an action that is supposed to get a file via SFTP and that could go into error for example because the file in question is not present (but it might be later) or due to a temporary network problem.
The following image shows an example of this Logic App run failed due to an error on the get SFTP step: 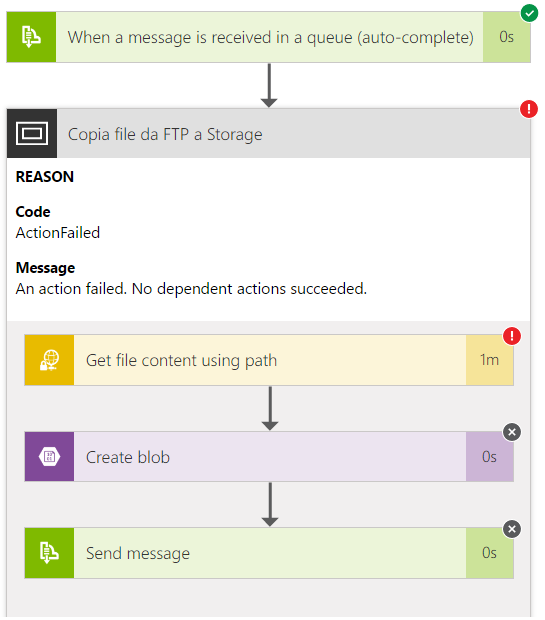 By clicking “Run details” we can obtain further information. In fact it opens a window with a list of the steps, their execution status, duration, and so on..
In this case we can see once again that the get SFTP step failed. 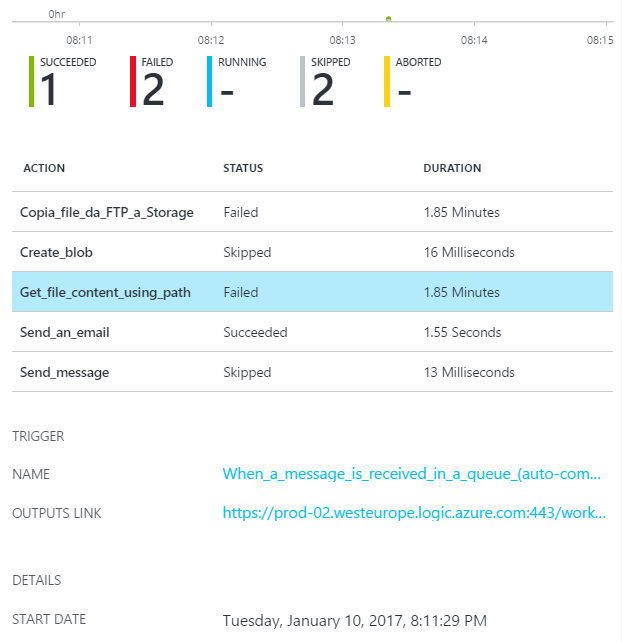 Clicking on the line of the step at issue and then, in the new window that opens on the right, on “OUTPUTS LINK” we can find information about the action failure cause.
In this case we see that it was a general problem with the connection to the SFTP server, surely temporary because further executions of the same Logic App, with the same configuration and run practically in parallel, have been successful. 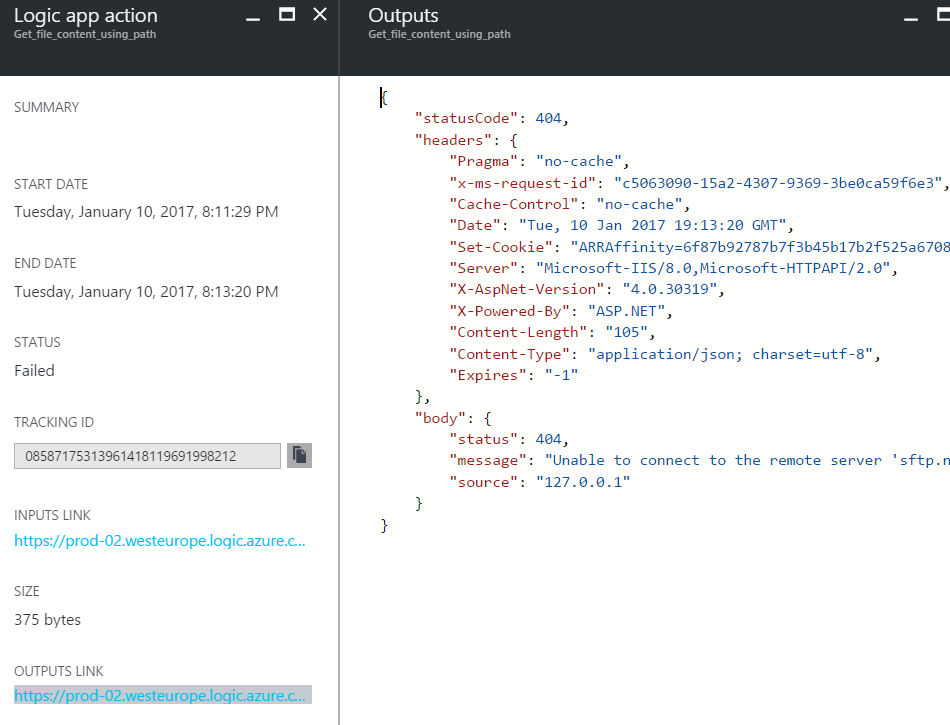 Here are the details of the error message we get:

Being due to the temporary unavailability of the server, this is the typical error that can be resolved with subsequent attempts after a certain interval of time. So, what we need to do to solve the problem is to implement a retry policy for this step of the Azure App Logic.
To do this we can use the Do-Until construct that the Logic App editor provides us.

The tasks to perform are basically the following:

So, first of all we add to the Logic App a Do-Until construct 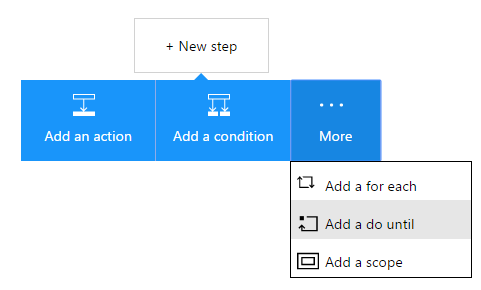 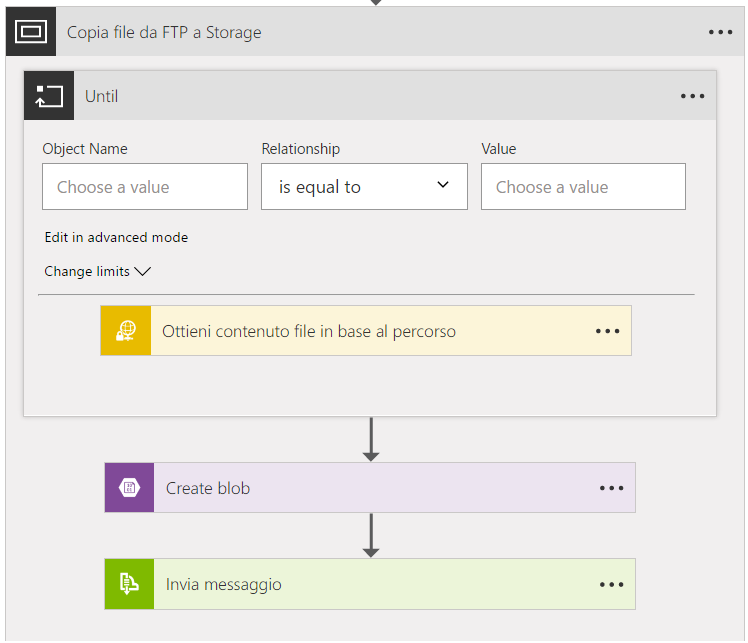 By clicking on “Change limits” we expand the configuration section in which we can define:

The latter value is defined by using the ISO 8601 standard, which regulates interchange formats for date and time values. In summary, to express a duration, is necessary to define a string formed from a Period (P) and a Time (T).

By default, it is set to PTM15 which means: 15 minutes 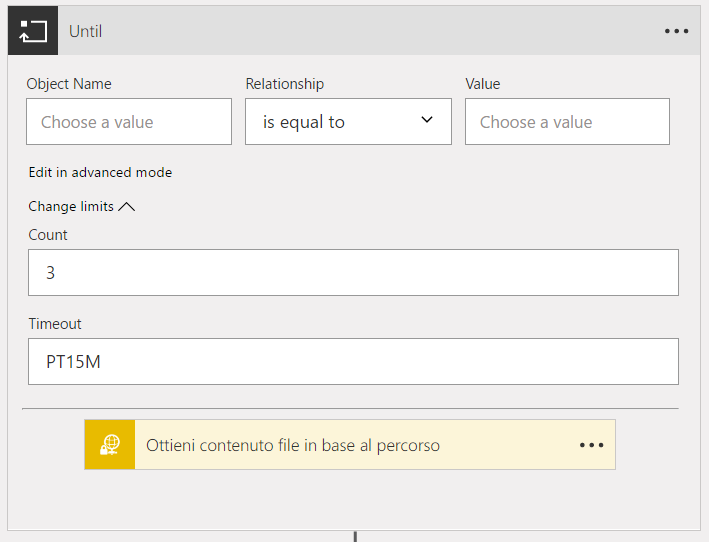 That said, we only need to define the exit condition for the Do-Until loop that, as mentioned, should be tied to the success of the step within the construct: if the execution is successful we must exit the loop because retry attempts are not required anymore.

In order to define this condition we move to the advanced mode for conditions configuration by clicking on “Edit in advanced mode”, and insert the following string:

The following image shows the insertion of this configuration for the loop condition: 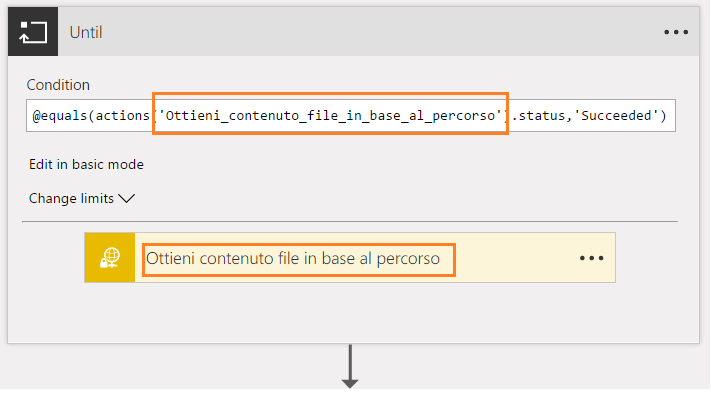 In this way we are saying not to re-enter the loop if the execution status of the “Get content using file path” action, that is, our get SFTP step, is “Succeded“. If instead the step, when an error like the one in the above example occours, should end up with a “ Failed ” status, “Count” attempts would be performed in the time range defined as “Timeout”.

We have therefore implemented a retry policy on a sensitive step in our Azure Logic App.

One thought on “Microsoft Azure Logic Apps: using the do-until construct to implement a retry policy for a step”