In a previous post I spoke about the advertising platform RevenueHits, showing results obtained in the first month in which I placed the ads of its circuit on this blog. A few months later, I raise up the subject to continue the analysis started at the time.
As a preamble, it is useful to remember that RevenueHits is a circuit of ads based on their performances, evaluated in accordance with a so-called CPA, Cost Per Action, where an advertisement generates revenue based on the action the user performs on it (click, email insertion, website registration, files download, etc..) depending on the type of ad. However, the administration dashboard of RevenueHits does not provide any analysis tools or advanced information about the types of actions performed by the users; the only data provided are just the number of impressions and number of clicks, so analysis will necessarily be based only on these measures.
After experimenting a bit every kind of ads provided by the circuit RevenueHits (banners, interstitials, footer, shadow box, pop-unders), I decided that what would have offered me the right balance between being profitable and not being too invasive for the visitors was the type Shadow box. From November 2015 I decided to eliminate all other types of ads and I left one banner (type shadow box) on the blog and, more exactly, only on single article pages. These are the results obtained after 10432 page views, of which 9403 were unique, scored during the month of observation: 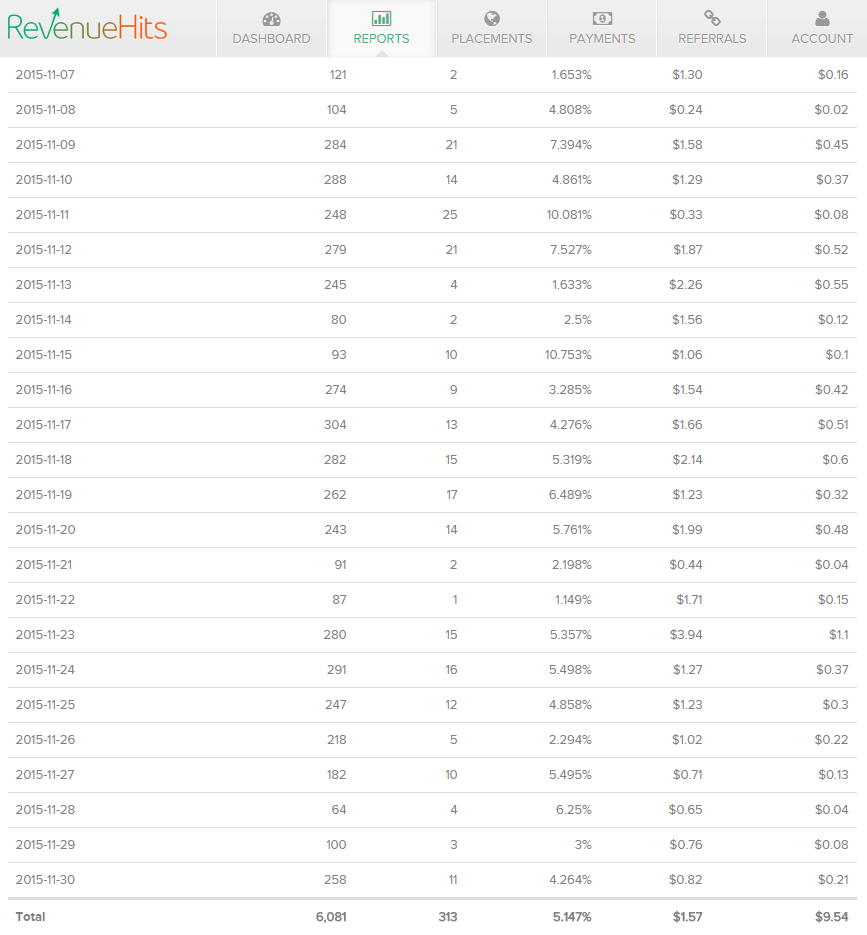 The thing now I want to focus on is the traffic analysis that, in terms of geographic country of origin, effectively produced a profit.
Here below you can find the table of 10 countries that contributed most to the achievement of the profit obtained during the observation period (November 2015): 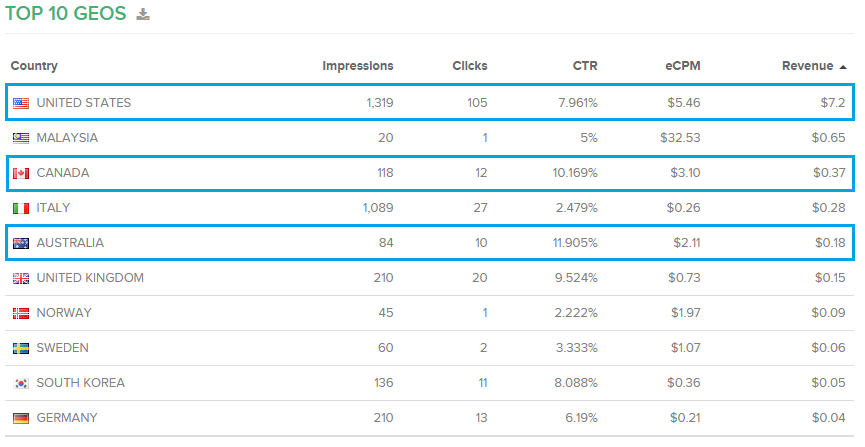 As you can see, the only visitors countries that produce a significant income are USA, Canada and Australia, with the following eCPM values:
USA: $ 5.46
Canada: $ 3.10
Australia: $ 2.11

I excluded Malaysia from the list, even if it appears in the image with an eCPM of $ 32.53 because that is just the result of a single significant action (probably a download) made by a user (and observed in a daily report) that is 65 cents worth (produced from the country during the month). This, combined with the negligible number of impressions and clicks on a monthly basis, leads me to exclude it from the argument. 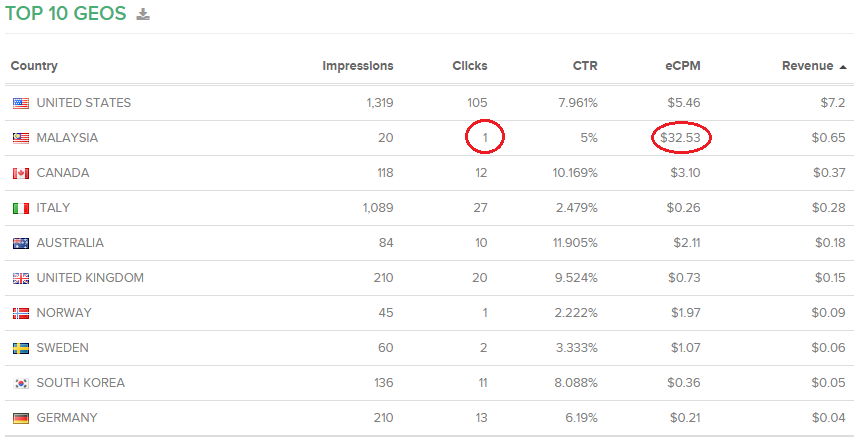 The traffic from Italy, at the moment, has a value completely negligible as shown by the 28 cents accrued for 1,081 impressions and 27 clicks, for an eCPM of only 0.26 dollars. The CTR, stuck at 2.47%, is among the lowest in absolute terms and this data can be probably attributed to the low “quality” of the ads visible coming from an Italian IP address (remember that RevenueHits ads are Geo Targeted, ie visitors from different countries see different ads, more relevant to their geographic area) the same fact I was complaining about at the end of this other article.
Even more pointless is traffic from India that doesn’t even enter in the top 10 most profitable countries, although it is the third largest source by number of user sessions and, therefore, of ad impressions. RevenueHits, in addition to the screen of the first 10 countries in the dashboard, allows you to download the full report in csv format. Downloading it and going to look for the data related to India, I found the following:
INDIA
Impressions: 660
Click: 15
CTR: 2.273%
eCPM: $ 0.05
Revenues: $ 0.03

Basically, India produced about half of the visits and impressions coming from USA, but it generates only 3 cents compared with more than $ 7 of the latter.

In conclusion: if you have a blog in Italian or, in general, your website mainly attracts traffic from visitors coming from Italy, with RevenueHits you won’t succeed in earning almost anything and it would be better to evaluate other advertising channels. However, if your site or blog is in English and mainly attracts visitors from the United States, then with RevenueHits you can even get interesting results.

4 thoughts on “RevenueHits: only the traffic from the US, Canada and Australia produces an income”