I’m one of millions people across the world that has got a ban from Google Adsense many years ago, because of a music website I created, where many friends clicked thinking to do me a favor. Recently I read several articles about the RevenueHits platform that seems to be universally considered “the best Google Adsense alternative”. All these articles promise you to earn lot of money with this advertisements platform and all of them describe a $30 eCPM as quite easy to reach but they just describe how it works, the type of placement and so on. Actually, I didn’t find nobody illustrating real data about earnings in relation with pageviews/impressions. A lot of posts had comments of people asking information about expected CTR or eCPM or the number of visits needed to get approximately X money and answers were always the same: “it depends of your niche”, “you should improve your traffic” and so on. Ok, that’s all true, but people just want real numbers!
So I decided to try this platform here on my blog and I’m going to show you results I got in August. The blog scored about 7530 pageviews (250 daily average), 6440 unique (210 daily average) in August and I put just two banners on the single post page, because I didn’t want to make articles unreadable. So for this first experiment I just used the good old banner format and I didn’t include other formats like footer, popunder or shadow box. I put a “300X250 medium rectangle” banner at the start of the article with a left alignment and a “728X90 leaderboard” at the end of the article. Most of articles are technical posts or tutorials about software development so this can be considered its category, even if there are other posts about different topics like music, books, travelling..
Results of my first month using RevenueHits are the following:
Impressions: 9643
Clicks: 44
CTR: 0.456%
eCPM: $0.43
Revenue: $4.19 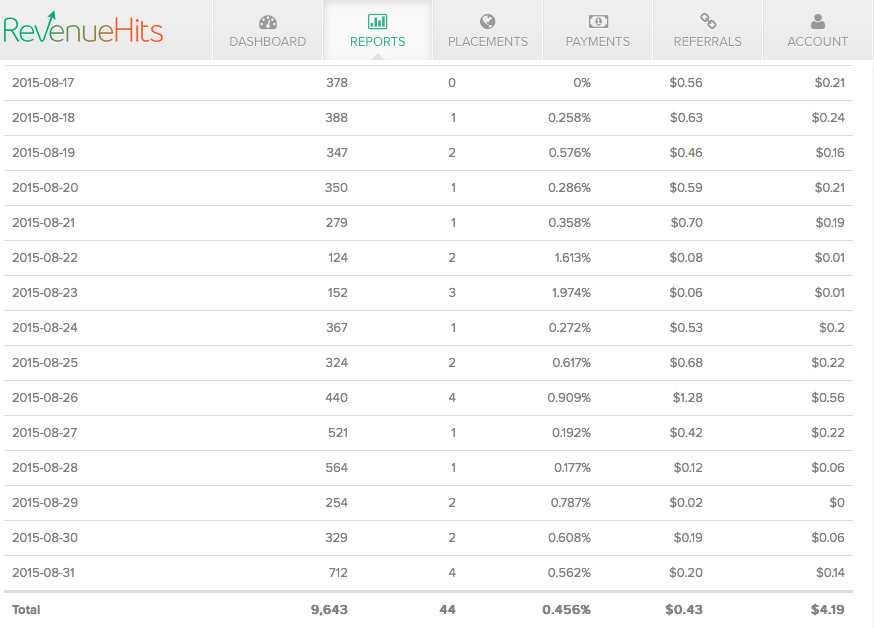 With RevenueHits platform ads are contextual and geo-targeted, so users of a specific country see ads related to their area. In the same way clicks from different country can generate very different revenues. Looking at the detail of earnings grouped by country we can see that The United States have generated $3.6 from 3233 impressions while Italy and India with 1/3 impressions have generated only few cents. 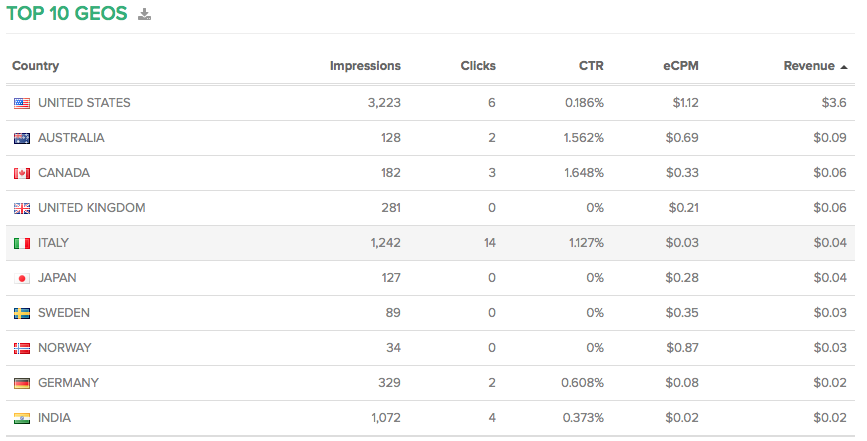 Actually RevenueHits is a performance based network with a CPA, Cost Per Action, strategy. It means that users generate revenue not for the click itself but if they take an action like insert their email, download a file and so on. This is the reason because for example United Kingdom generates 6 cents without any click. Anyway, in the administration panel the only available information are number of impressions and number of clicks, so we still have to base our analyses on these parameters.
Finally, what I really don’t like of this my first experiment with RevenueHits is the quality of the advertisments that appear on my blog. As I said before, ads are geo-targeted and basically, by loading my pages with my Italian-based IP, I get only that kind of stupid banner like “you need to upgrade this plugin to see the video” and other “download this..” stuff. So the typical banner that everybody hate and would never click. And also the kind of banner that I don’t want to propose to my readers! Probably this is due to the fact that the network in Italy is still non developed and there aren’t “serious” advertiser putting money on it.

Anyway, I will make some further tests in September, trying also other kind of placements like “shadow box”. Then I will discuss results again.

Now I would be really interested in knowing about your experience with RevenuHits.
Did you get similar results?
What are your eCPM and your CTR with RevenueHits?
Did you see any relevant ads or just download-like banner as I did?

72 thoughts on “RevenueHits: this is what I ACTUALLY earned in the first month”